This week’s University of Kentucky Hockey Club player profile is Aaron Bickle. Aaron is a senior forward from Fishers, In.

1: What pulled you into hockey and made you want to play?

AB: I was raised in an area where hockey was popular. I started skating at age 4 and never stopped.

2: Who is your favorite team and player?

AB: My favorite team is the Pittsburg Penguins and favorite player is Chris Kunitz.

3: Who would you say has helped you the most in your hockey career?

AB: My high school coach, the rink general manager, was around my hockey career the most. I grew up with him and he was practically my coach until college.

4: Do you have any pregame rituals or superstitions?

5: What brand of gear do you use for your stick, gloves, and skates?

AB: I use Bauer everything. 6: Would you rather score a goal, hit a nice pass for an assist, or lay a big hit on an opposing player?

AB: Lay the body. Some refer to me as a hot head in some cases.

7: Where do you see yourself in 5 years?

AB: Making a mess load of money in DC.

8: What is your favorite thing about Lexington?

AB: Isn’t it obvious, the girls.

9: What would you like to say to the Big Blue Nation?

AB: Thank you to the BBN for coming out at midnight and getting loud! It’s like no other feeling playing hockey with a fan base like ya’ll. 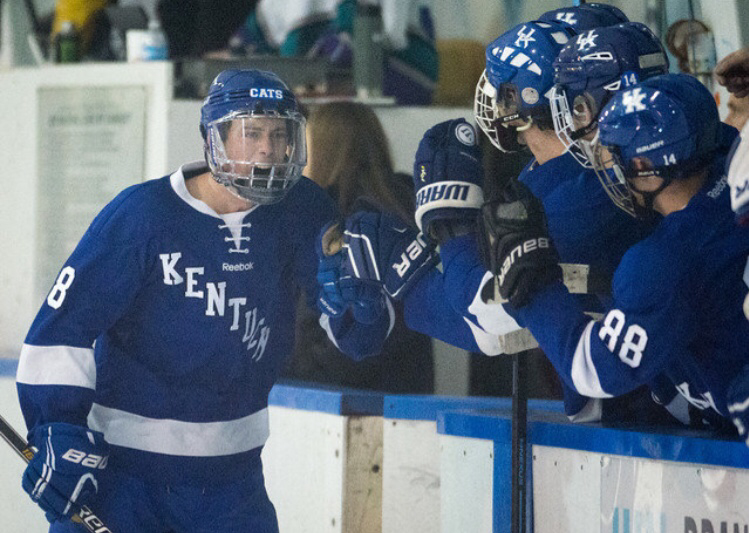 Thank you to Aaron for taking the time to do this. You can catch Aaron and the rest of the Wildcats at home this weekend against Cleveland State. It is National Guard weekend, so come out and have some fun. The games are at the Lexington Ice Center this Friday and Saturday at midnight and are $7 for admission. Come early, wear blue, and BE LOUD! Go Cats!!

*all photos used with permission from UK Hockey*