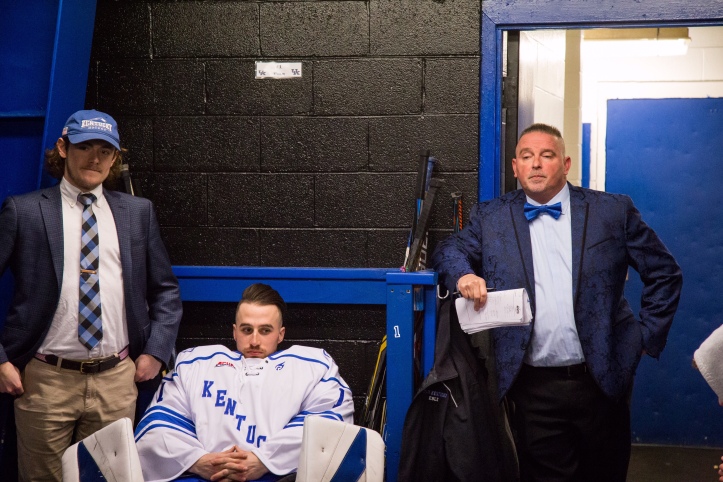 This week I had the pleasure of getting to do an interview with UK Hockey’s head coach, Tim Pergram.  He has been a huge lift to the program, just finishing his first year leading the team.  The team jumped from 3 to 20 wins in his first year, had 5 players named All-SECHC, and himself and 6 Cats were selected to the SECHC All-Star team that went on to win the ACHA DIII Nation Championship.  People around the program say that he is the best thing to happen to the program in a long time.  I have been lucky enough to visit with him a few times, and watch how he interacts with others.  I can say that myself, and those around the program, have a lot of respect for Coach Pergram.

1:  How did you get into hockey, and what brought you to UK?

TP:  How did I get into Hockey? Well it started with the Kentucky Thoroughblades AHL Team in Lexington (1996-2001).  My family (Susan, Clay and Cam) got to be very close with a lot of the Russian players to the point they would stay in Lexington over the summer with us.  We had a lot of meals with the Russian and Czech players.  During that time my son, Clay, became a huge hockey fan and mini mite player.  I spent a lot of time with Coach Sommer (T-blades head coach) because both our boys played mite travel.  I started out with Level 1 coach certificate, and within 7 years was a Level 4 and coaching AAA Bantam and Midget hockey.  Some of my players received full division one scholarships and then drafted.  I was able to take teams to Tier 1 nationals, prep school tours, and winning a Hockey Night in Boston National Championship. What brought me to UK was Mr. Clint Ison, our Directory of Hockey Operations.  Clint is a very close friend who has coached with me at Dunbar High School and knows the expectations I have for a hockey player.

2:  You play a very aggressive style of hockey. Defensemen pushing up, sending four lines of forwards at other teams. Generally wearing down the other team through the game by pushing the tempo.  How did you come up with this style of play?

TP:  My whole philosophy is just to keep the tempo up. This past year was just a glimpse of what is to come in the future.  I prefer to run four lines of forwards and 3 lines of defensemen.  In practice everything is up tempo to get the players to a state of oxygen deprivation, and try to explain a complex drill.  Same thing in a game, if they are oxygen deprived can they understand what you are wanting them to do on the ice?  Next year we will push the tempo even more, because the players know the expectations.

3:  In your first year you were able to take a three win the team from the year before, and win twenty games this season. Now that the season is over and you can look back at it as a whole, what would you say are areas that can be improved and the areas you are really proud of?

TP:  We should have won four to five more games, and I take the blame on that.  A couple of games I should have went to a trap sooner or neutral zone hockey. A couple of games the boys weren’t ready for how physical the other teams played.  I’m so proud of my seniors, these guys had a few tough seasons before and they had to buy in to my coaching staff and myself.  My style is very direct, intense and I have high expectations in the classroom, community, and on the ice.  The other thing I’m proud of how great these student/athletes did in the classroom.  I am pleased our scoring increased dramatically, our defenseman and goalies cut down on goal against us and, the passing improved dramatically.

4:  The Barn is extremely loud and great hockey atmosphere.  How much of an advantage do you feel the crowd gives the team?

TP:  The Barn is incredible! The Lexington Ice Center staff and management have been incredible to the UK Hockey Program.  It truly is just a rush for an old guy like me when the students and fans start the chants.  We added a few things this year and have plans for a couple of new things next year.  The Barn is Magical!

5:  You and six of your players were selected to the SECHC All-Star team.  You went 5-0 and won the championship.  How was that experience for you, and how do you think it will impact the returning players moving forward?

TP:  The SECHC All Star team was outstanding for our players returning.  That was 5 games against top tier talent from around the country.  They played three weekends of college hockey in a weekend.  The other great thing they had a chance to play with top players from the Ole Miss Rebels, Florida Gators, Georgia Bulldogs, and Arkansas Razorbacks.  I also got to see everyone in a short amount of time bond to be the SEC TEAM.  Every chant leaving the bench was SEC!

6:  The team experienced a lot of fun and important moments this season.  Opening weekend sweep of MTSU, the first ever SECHC home game when Tennessee came to Lexington, a undefeated regular season against the SECHC, five players named All SECHC, and six players and yourself names to the SECHC All-Star team. What moment from this season would you say was your favorite?

TP:  I was emotional after the Georgia win at the end of the regular season.  It didn’t hit me that none of my seniors had every won the last regular season game.  I just noticed a lot of the players were very emotional, and yes it hit me hard.  I have a very special place for this senior class.  That was a special win against an incredible team.

7:  You have a lot of really talented guys returning from a team that improved by 17 games in the win column, and a good class committed at the moment.  What would you consider taking another step up next year to be?

TP:  When everyone reports and the team is picked we will start putting all the pieces together.  Yes I have high expectations for next season.  This was a good start but like I said before, we should have won 4-5 more games. that is my fault, not my players.

8:  This year we were lucky to be apart of a very special moment, the creation and presenting of the Taylor Vit Leadership Award.  It was a great honor to be able to be apart of something that was so special to the UK Hockey community and the Vit family.  What are your thoughts on that moment, the award, and Cory Day being the first ever winner of the award?

TP:  The Taylor Vit Leadership Award was awesome, thank you Rob.  First, I remember when this terrible event occurred.  I had some former AAA players on that team.  Everyone knew this award was special, and his parents and some former teammates attending was outstanding.  Mr. Vit asked me to do one thing for him before he left the ice and I told him it would be taken care of. The boys then took care of business.  On Cory winning the award, very well deserved.  He’s been a pleasure to coach and just watch him smile and have fun.  He was great when I would have an intense motivational talk in between periods to make sure the boys were good.  This was a very young team.

9:  In closing, what would you like to say to the Big Blue Nation?

TP:  We love the BBN!  They come out and support our team and players.  When we are talking to prospective players, they hear about the crowds and the BBN.  This makes a huge difference when you’re talking about being followed on twitter and 1000 fans at a midnight game.  Plus next year Dr. Capiluto is dropping a game puck, we have our poster person just waiting for there jersey, and I’m hearing we have a lot of folks calling asking to drop a puck.  BBN, the UK Hockey Team loves you!

I want to thank Coach Pergram for taking the time to do this.  The staff is thick in recruiting right now, which is going very well, and I know he is busy with that.  I can say that I am really excited to see where this program goes under he, and his staff’s, direction.  Good times are ahead I feel, get onboard BBN. This coming season is going to be fun.